A GDP is a traffic management initiative where aircraft are delayed at their departure airport in order to reconcile demand with capacity at their arrival airport. Flights are assigned expect departure clearance times (EDCTs), which in turn regulate their arrival time at the impacted airport.

GDPs will normally be implemented at airports where capacity has been reduced because of low ceilings, thunderstorms, or any other time when demand exceeds capacity for a sustained period.

They are implemented to ensure the arrival demand at an airport is kept at a manageable level, to preclude extensive holding, and to prevent aircraft from having to divert to other airports. They are also used in support of the Severe Weather Avoidance Plan (SWAP).

Ground delay programs affect all flights within the defined “scope” of the program. A program’s scope – which flights are captured in a program – can be specified by distance, by center, or by tier. For more information about scope, visit NBAA’s Scope of Traffic Management Initiatives (TMIs) web page.

Ground delay programs have evolved over time, originally being run in either Delay Assignment (DAS) mode or GAAP mode, but now being run exclusively in Unified Delay Program (UDP) mode.

DAS was the original mode that GDPs were designed to run in. The FAA uses software called Flight Schedule Monitor (FSM) that compiles scheduled flight information and flight plans to calculate and then display graphically the known demand for arrival and/or departures at airports. When an overage of demand versus capacity is noted, a GDP is modeled through the FSM software. FSM assigns arrival “slots” to aircraft based on the available capacity and flight arrival times, and adds delays in sequential order until demand equals capacity.

As a result of this process, expect departure clearance times (EDCTs) are issued to individual flights to ensure they arrive at their destination airport when they are supposed to.

GAAP mode GDPs were introduced later and were used alongside DAS mode programs until 2011. GAAP mode added a new aspect to GDPs, better allowing them to handle situations where an increase in demand at an airport was expected, but in unknown numbers. To do this, additional empty slots were built into each hour of the program to allow for late-filing flights, known as “pop-ups” to the FAA. When late-filing flights entered the program, the system automatically looked for the next available open slot to place that flight into – this ensured that demand would not exceed capacity at any point.

In 2011, Unified Delay Program (UDP) mode GDPs were introduced, combining elements of DAS and GAAP mode programs. UDPs were designed to be more efficient and equitable in how delays are assigned when an airspace constraint exists. UDP mode is now used in virtually all delay programs.

With UDP, flights that are not considered “known demand” at the time the program is issued are assigned whatever the average delay is for the program, before it even BEGINS to look for the next available slot. In addition, the number of open slots is smaller than with GAAP mode GDPs, and is determined by a historical “reserve factor”. The result is that late-filing flights can end up with excessive delays.

How Do GDPs Work?

As mentioned above, FAA uses software called FSM that compiles scheduled flight information and flight plans to determine when an overage of demand versus capacity exists for a specific airport.

The first step is for an Airport Acceptance Rate (AAR) to be set. The AAR is the number of aircraft an airport can accept in a one-hour time frame. The AAR is determined by the Aviation System Airport Performance Metrics, which takes into consideration the runways in use, weather conditions, and NAVAID limitations.

A GDP is then modeled through the FSM software and arrival “slots” are assigned to aircraft, based on the available capacity and flight arrival times. Delays are then issued in sequential order until demand equals capacity for each hour of the program.

This is best illustrated using screenshots from the FSM software. In the image below, flights indicated in black have already arrived, those in red are airborne, those in light green are scheduled, and those in dark green are past their scheduled departure time.

As can be seen in this screenshot, spikes in demand can be seen at EWR beginning in the 1600z hour. In the 1800z hour, for example, EWR is expecting 47 arrivals while the Airport Acceptance Rate (the horizontal white line) is only 32. Something needs to be done to even these spikes out. In the image below, a UDP mode GDP has been implemented at EWR beginning in the 1700z hour. The AAR has been set at 34, increasing to 38 in the 2000z hour. Now that the program has been run, the demand spikes have been leveled out by spreading the demand over the program hours into the future. Those flights in the GDP (indicated in brown) have all been issued EDCTs. 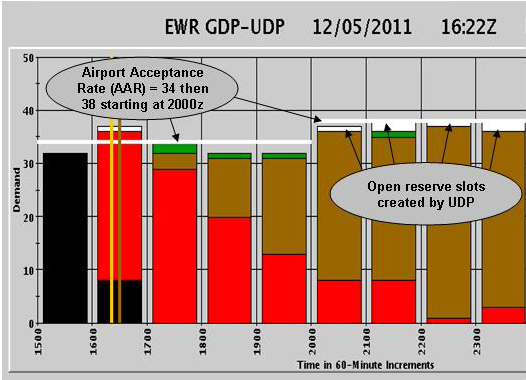 Note the white spaces at the top of the demand bars in the 2000z – 2300z hours. These white areas represent open reserve slots that are built into the program to allow for “pop-up” flights.

Aircraft that are not in the original list of flights when the program is implemented (known by FAA as “pop-up flights”) will also receive a delay. Their delay will be equal to the average delay (of all other flights arriving in the 15-minute time interval that their flight is requesting to arrive) plus whatever time before the next available open reserve slot. This includes aircraft which depart VFR and obtain their clearance once airborne.

Sources of information regarding GDPs

When a GDP is implemented, the Air Traffic Control System Command Center (ATCSCC) details the parameters of the program(s) and issues an advisory which can be found in the FAA Advisory Database.

Current programs are also displayed on the ATCSCC Operational Information System (OIS) web page under the National Programs section. Each line details the program airport, the start and end times of the program, flights included, scope, reason, average delays (AVG), airport acceptance rate (AAR), program rate (PR), and the corresponding advisory number with a hyperlink to the advisory. Learn more about the OIS.

Air traffic personnel monitor the NAS for high demand sectors/airports on a continuous basis. When a concern is raised about the traffic situation at a specific sector/airport, a conference is held among impacted air traffic facilities, the ATCSCC, and the primary system customers at the airport to discuss alternatives and modeled scenarios.

An advisory may be issued when a GDP is being proposed but not yet implemented. If the decision is made to implement a GDP, then EDCTs will be sent to affected flights. An advisory will also be issued that states a GDP has been implemented. Learn more about Advisories.

In order to obtain EDCT information, users may access the FAA’s EDCT Lookup Tool and provide their call sign, origin and destination exactly as entered on their filed flight plan. Other options include contacting the tower at the departure airport or contacting the flight plan service provider being used.

Aircraft must depart within +/-5 minutes of their EDCT to be in compliance with the GDP. Each aircraft operator needs to plan to taxi in a manner consistent with meeting the EDCT. If an aircraft is late, air traffic controllers are required to call the ATCSCC to get a new EDCT. This could mean additional delay for the aircraft and missed slot opportunities for other aircraft. If an EDCT cannot be met or a different time is needed, the pilot should contact ATC or the flight plan service provider for assistance.

All aircraft filed to a GDP airport, that are known to the FSM software, are assigned an EDCT, but it should be noted that not all aircraft will receive a delay.

It is important to note that EDCTs can change, based on changing conditions at the GDP airport such as changing weather conditions or changes in the airport acceptance rate. In addition, Adaptive Compression can cause an EDCT to be moved earlier. Operators are encouraged to remain aware of what is happening in the NAS and to check their EDCTs regularly.

One final note: it is possible to get an EDCT which is outside the parameters for the GDP that are posted on the OIS web page. The reason for this is that GDPs are based on original scheduled arrival times and the estimated time enroute (ETE) is considered in determining the appropriate departure time. As a result, an EDCT may be issued that would result in a flight arriving after the end of the GDP.