Join titans of the business world as they kick off the biggest week of the year in dynamic fashion. Sharing practical tips gleaned from their successful careers, these accomplished individuals will set the tone for an innovative, forward-thinking show.

Additional keynote speakers will be confirmed in the coming weeks. Having left the basketball court for the boardroom, Earvin “Magic” Johnson has successfully parlayed his skills and tenacity from the court into the business world as Chairman and CEO of Magic Johnson Enterprises (MJE). Johnson, who serves as Chairman and Founder of the Magic Johnson Foundation, also continues his commitment to transform Urban America through HIV/AIDS Awareness and Educational Programs. Remaining true to his humble Lansing beginnings, he is unwaveringly dedicated to working with major corporations and partners to bring jobs and high-quality products and services to underserved communities. A Dallas, TX native, Ross Perot, Jr. serves as chairman of The Perot Group, which manages Perot family interests that include real estate, oil and gas and financial investments. Perot is also chairman of Hillwood, a Texas-based, global real estate development company, which he founded in 1988. Perot will be presented with the NBAA Meritorious Service to Aviation Award, business aviation’s most distinguished honor. Over the past 25 years, Sky Dayton has founded and built companies that have helped propel the Internet into our everyday lives. Dayton founded EarthLink in 1994 at the age of 23 which grew to serve millions of consumers and helped usher in the Internet revolution. Dayton was named Entrepreneur of the Year by the University of Southern California, served on the board of the Center for Public Leadership at the Kennedy School at Harvard University, and currently serves on the Parents’ Advisory Board at Stanford University. Steuart Walton is the founder and chairman of Game Composites, Ltd., a company that designs and builds small composite aircraft. Walton also serves on the board of directors of Walmart, Crystal Bridges Museum of American Art, Leadership for Educational Equity and the Smithsonian National Air and Space Museum. Walton was born and raised in Bentonville, AR, and has a special interest in giving back to his hometown and state through both personally directed contributions and the Walton Family Foundation’s Home Region program.

Additional keynote speakers will be confirmed in the coming weeks. Captain Barrington Irving has traveled to over 60 countries, conducted more than 50 STEM expeditions, and successfully challenged middle school students to build a car faster than a Ferrari 430 and then high schoolers to build a plane he flew on its test flight. Irving will be presented with the 2019 American Spirit Award in recognition of his courage, pursuit of excellence and service to others. Maj. Gen. Jeannie M. Leavitt is the Commander, Air Force Recruiting Service, Joint Base San Antonio-Randolph, Texas. She is responsible for all enlisted accessions and a variety of officer accession programs. Prior to her current assignment, she served as the 57th Wing Commander, Nellis Air Force Base, Nevada, the Air Force’s most diverse flying wing comprised of 37 squadrons at 13 installations with a variety of more than 130 aircraft.

In addition to her illustrious military career, Leavitt worked with actress Brie Larson to prepare for Larson’s role as a fighter pilot in the Captain Marvel movie, where she was on set to help Larson during the Air Force-related shoots. Eric Allison leads the Elevate initiative to re-imagine urban transportation through the air. Previously, Eric spent eight years at Zee Aero leading the development of the Cora vehicle, a two-place self-piloted air taxi. He was part of the founding team at ZEE, and served as CEO from 2015 to 2018. Through this time, Eric has been at the forefront of aerospace research, development and manufacturing advances in electric propulsion, energy storage, vehicle autonomy, and composite structures. 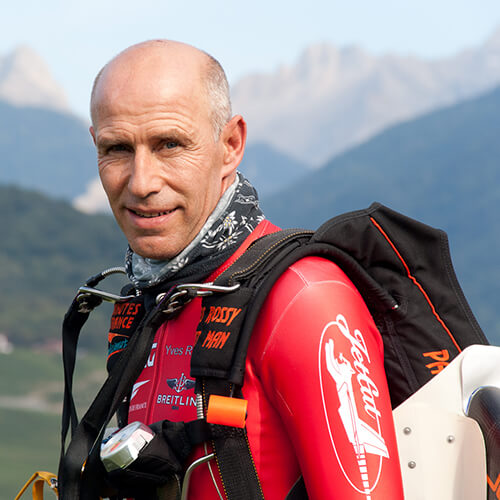 In 2004, Yves Rossy became the first man in the history of aviation to fly with a jet-propelled wing. This achievement was the culmination of ten years of development and more than 15 prototypes. The only instrumentation he had was altimeter and a hand-held throttle. Since then, Rossy has been working constantly to optimize his wing’s handling and performance.