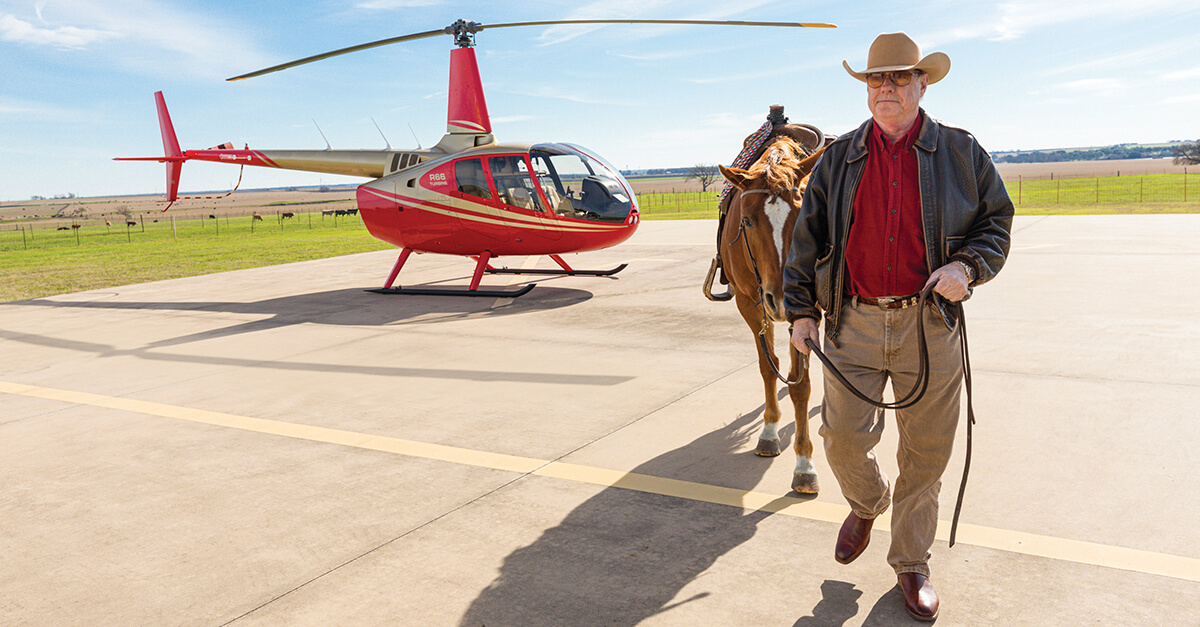 Landing his Robinson R66 in the middle of his bustling cattle ranch in Schwertner, TX, Jim Schwertner is beaming. The president and CEO of Capitol Land & Livestock has just surveyed several hundred acres from the air, checking for downed fences, leaking troughs or sick cattle. Everything is okay.

Everything, in fact, is great. On this cold sunny morning, Schwertner is hard at work and right at home with his twin passions: cattle ranching and aviation.

“I’ve loved airplanes since I was six years old,” says Schwertner. “My father had me out riding in the fields. I’d look up at a plane passing overhead, and I wanted to be up there. My father did too, but for a different reason: he loved airplanes because they were good for business.”

Every day, Capitol Land & Livestock buys and sells cattle in a dozen states, from Florida to California, often using a Cessna Citation CJ2 to get to ranchers, auctions and feedlots before other cattle dealers can.

The helicopter flies at least twice a week; however, the company’s history with aviation goes back to its founding nearly 75 years ago. Jim Schwertner’s great grandfather immigrated to the United States in 1875, settling north of Austin, TX, where the dark soil matched that of his native Germany. His family founded the Texas town of Schwertner, eventually setting up a mule auction.

Eugene Schwertner, Jim’s father, started his career as a cattle buyer, working on commission before opening one of the first public cattle auctions in Austin in 1946.

“When my father heard a rancher had cattle for sale in Laredo [TX] or Shreveport [LA], he would go out to the old airport in downtown Austin and charter a Piper Comanche from Browning Aerial Service,” explained Jim Schwertner. “He’d fly out there, and all his competitors would drive, taking six or eight hours [to get there].
My dad had already come and gone.” Growing up, Schwertner saw the
edge aviation gave his father. “Business aviation was my dad’s secret weapon,” he said. “He could get to the cattle before everybody else.”

As his business grew, Eugene opened cattle auctions all across East Texas and encouraged Jim to pursue his passion for flying. Jim started his pilot training at 14, soloed on his 16th birthday and had his license a year later. Before leaving for college, he had already flown his father to buy cattle. Eventually, his father bought a Piper Aztec and Jim joined the business as a cattle buyer and pilot. For a couple months after Jim joined the company, everything was great. Then the economic turmoil of the 1970s upended the cattle industry.

“I was just out of college, and the cattle market cratered,” recalled Schwertner. “Three-quarters of my father’s customers went broke. We had to completely change our business model.”

Working with a professor at Texas Tech, Schwertner developed an algorithm to manage risk as a cattle day trader.

“It really saved our company,” said Schwertner, “because the new players buying cattle and the feedlots wanted to know the exact price right then to hedge their orders.”

To make the new business model work, Schwertner had to meet a lot
of feedlot farmers and convince them face-to-face.

“That’s what I love about this business, it’s all done with a handshake,” he says.

Schwertner began flying not only to meet ranchers, but also to feedlots buy-ing cattle in Amarillo, TX; Lincoln, NE; Garden City, KS; Hope, AR; and as far away as Brawley, CA. His father sold the Aztec, moving up to a Navajo Chieftain and, by the 1990s, an Aero Commander.

“We’re open 24/7,” said Schwertner, “We buy cattle from all over the country, bring them here at night. It’s a hub-and-spoke system. The next day, we ship them all out and start over.”

“We do $3 million of business a day,” says Schwertner. “We turn over 100 percent of our inventory every 24 hours, so it’s a real fast-paced business.” To keep up with that fast pace, Schwertner traded up to a Cessna Citation CJ1 in 2011 and then a CJ2 in 2017. He flies up to 250 hours a year, almost exclusively for the business. His average business trip length is about 650 nautical miles.

With more than 8,000 flight hours in his logbook, Schwertner is commit-ted to staying current and proficient. In 2018, he received the FAA’s Master Pilot Award. On about half his flights for the cattle trading business, Schwertner flies with a lifelong friend, Tim Casey, a retired business aviation pilot with more than 20,000 hours.

“We’ve flown together for nearly 50 years,” said Schwertner. “If the weather is going to be hard, or if I’m going to a high-traffic area like Chicago or the East Coast, I’ll see if he can ride with me. Also, if I know it’s going to be a stressful day when I’ll be focused on my business, I’ll take another pilot.”

When he was 50 years old, Schwertner started learning to fly helicopters. Like many rotary wing aircraft students, he learned in a Bell 47 trainer, but the transition from fixed wing to rotary wing was much more challenging than learning to fly the jet.

“My instructor told me that airplane pilots are the worst helicopter students, because you have to undo all the muscle memory you have from flying fixed wing, and he was exactly right,” said Schwertner. “I didn’t feel comfortable flying the helicopter at first.”

HANDS ON THE REINS

Indeed, learning to fly helicopters is often challenging for fixed-wing pilots. When fellow airplane pilots asked Schwertner what is similar between a helicopter and an airplane, he would respond: “As far as I can tell, the radios and nothing else.”

Learning to fly a helicopter was challenging, but eventually Schwertner earned his commercial certificate and became comfortable in a rotorcraft. Now, he flies his Robinson R66 twice a week to survey the ranch’s 20,000 acres. The territory that took his father five or six days to survey, Jim Schwertner can do in a single afternoon. Sometimes, he even helps the cowboys find stray calves from the air.

“It’s a real tool for me in our business,” says Schwertner. “Business aviation is a big part of what keeps us successful.
I don’t know where we would be today without it.”

LEARNING FROM A LEGEND

When he was 14 years old, Jim Schwertner started taking flying lessons, but not from just any instructor. He learned from aviation pioneer and grande dame of the general aviation industry in Texas, Emma Carter Browning.

Browning was the longtime president of Browning Aerial Service, the historic and widely regarded FBO on Austin’s former Robert Mueller Municipal Airport. She took her first flight in 1929, after meeting at a Texas air show the barnstorming aerobatic pilot who would later become her husband. She flew for another 74 years, but devoted much of her time to running the FBO – one of the first and only women presidents of a general aviation business in that era.

“She was a special lady,” recalls Schwertner. “She was on a first-name basis with Charles Lindbergh and Amelia Earhart. I had the best teacher you could ever have, and she was my instructor for 30 years. I went back to her for my recurrent training every year until I was about 45.”

Although Robert Mueller Municipal Airport eventually closed and the FBO was sold to Signature Flight Support, the Browning Aerial Service’s arched wooden hangar still stands in the middle of Austin’s Mueller Lake Park. And the iconic sign that stood for years in front of that arch now adorns the wall of Schwertner’s hangar in Georgetown, TX, a treasured memorial and gift from Browning.

Aircraft:
A Cessna Citation CJ2 and a Robinson R66

Base:
Based at Texas’ Georgetown Municipal Airport (GTU)

Personnel:
Jim Schwertner is the owner/operator and pilot

This article originally appeared in the Jan/Feb 2020 issue of Business Aviation Insider.