Global Brand on the Prairie: Hormel

The Tendermaid diner in Austin, MN, with 16 stools around the counter, has proudly served Hormel hot dogs since the eatery opened in 1938. At the barbecue place down the street, you can order Spam three ways. And the Spam Museum is the anchor attraction on Main Street.

Hormel may sell branded foods to the world, but in this Minnesota town of 24,700 people – where the company has been headquartered and run its flagship plant since 1891 – it’s still treated like a local business. On the company’s 125th anniversary, townspeople filled the streets and celebrated with live music and fireworks.

“We’re a $9.2 billion company, and the largest employer in the community. We were founded right here in Austin, MN, and we’ve stayed true to our roots all these years,” said Mark Coffey, senior vice president of supply chain. “But without our aviation team, it would be almost impossible to be based here today.”

That’s because the Twin Cities are two hours north and the nearest commercial airport has limited airline service. With plants and customers worldwide, Hormel has used business aircraft since 1961 and today operates a G150 and a G280. Anyone in the company can travel on the aircraft, which serve three primary missions: supporting Hormel’s manufacturing plants, connecting with customers, and responding to emergencies, such as a production line going down. The air-craft enable Hormel to respond quickly to such needs, sending engineers and specialists to troubleshoot any problems. Those trips are rare, however.

“Usually we know the schedule a week to a couple months in advance,” said Lori Pirkle, scheduler and assistant to Coffey. “All the departments use the plane. Accounting, IT, sales, quality control use the plane a lot.”

The aircraft are also essential when Hormel acquires a new brand, taking teams back-and-forth as the deal comes together. For many years, the aircraft have not been used for personal trips, and a high percentage of missions are out-and-back day trips to Hormel’s 30 or more manufacturing plants and distribution centers in the United States. Sales teams often use the aircraft to bring customers to plants to showcase Hormel’s production process.

With all those missions, the G150 flies about 300 hours per year and the G280 more than 450 hours. They’re kept dispatch-ready by Hormel’s two maintenance technicians.
“We’ve had in-house maintenance personnel from the day this flight department started,” said Chief Pilot Rick Stoulil. “Any squawk we have, they’re here immediately.”

Both technicians previously worked as Gulfstream service center technicians, so they are capable of doing everything on the aircraft, up to and including the 500-hour inspection on the G150. (The G280 is still under warranty and goes to Gulfstream Dallas for the annual.)

“We try to do as much as we can, and the last couple years we’re doing about 85 percent of the maintenance in-house,” said Dave Triebwasser, chief of aircraft maintenance. “The parts for the G280 are still covered under warranty, but throughout the year, we change them ourselves.”

The technicians also have a central role in the department’s safety management system (SMS). They submit hazard reports as frequently as the pilots and participate in quarterly safety meetings.

“In the quarterly meetings, the safety group (that’s one of us and three pilots) meet to review hazard reports, talk through any SMS issues, decide how to mitigate them and bring them to every-one’s attention,” explained Triebwasser.

The pilots and technicians constantly work together on safety. Every two years, the flight department has a safety training day, when they share knowledge and brush up on the SMS. This safety culture has helped Hormel earn NBAA’s 50-year Safe Flying Award and achieve Stage 3 of the International Standard for Business Aircraft Operations (IS-BAO). 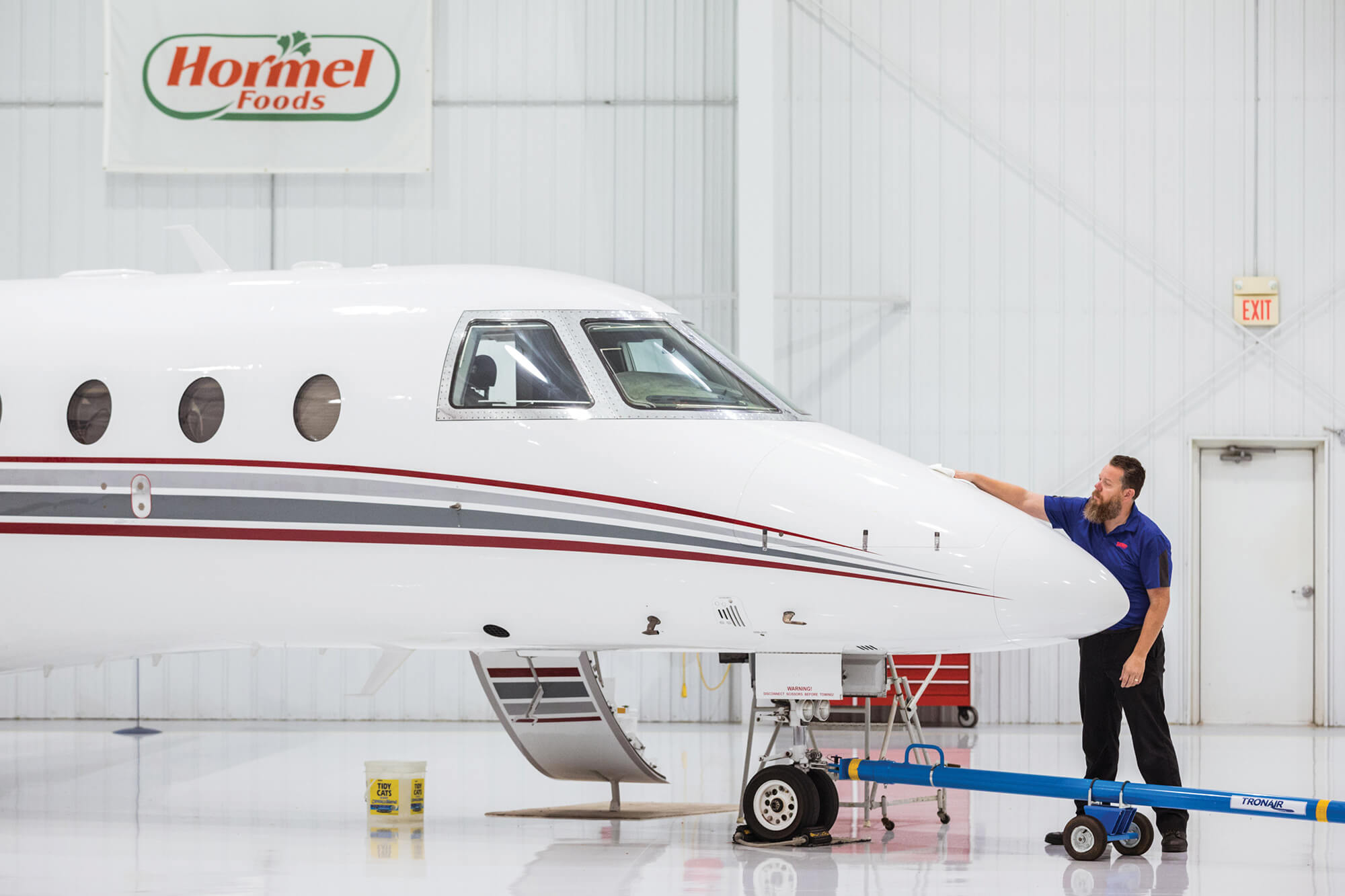 “We’re always looking for ways to make this the safest flight department it can be, whether it’s in the hangar or how we as pilots call out the checklists,” said Stoulil. “Our situation here in Austin is unusual because we don’t have deicing capabilities at this airport.”

In cold weather, if Hormel’s team takes the airplanes onto the ramp, fuels them and then starts to see ice building up, “our deicing procedure is to pull the airplane back into the hangar, warm it up and melt the ice,” said Stoulil. “And if we can go safely after that, we do.”

Other potential hazards of operating out of a rural airfield are uncontrolled traffic and bird strikes.

“We have a lot of migratory waterfowl around here, so every time we have a bird strike, whether it’s a small songbird or a pelican, we write a hazard report,” said Captain and Safety Coordinator Greg Vortherms. “And being at an uncontrolled airport, if there’s traffic in the area that doesn’t call out, if we get them on TCAS, we’ll keep our eyes open and fill out a hazard report for that.”

When flying to pick up customers, the pilots will evaluate new destination airports for deicing procedures, hangar space, runway length and decide whether to drop off passengers and reposition. The process of evaluating international airports starts months in advance.
In 2016, Hormel opened a plant just outside of Shanghai, China, to make Spam, Skippy peanut butter and other branded foods for the Chinese market. In recent years, Hormel has also acquired brands in South America. It also has expanded its operations in Mexico and Europe. As a result, about 10 percent of Hormel’s flying is now international.

When Hormel made its first trip to China in 2002, the pilots took a maintenance technician along to deal with any squawks or potential AOG events. Today, Gulfstream has enough international coverage that maintenance overseas is not usually an issue.

Back in 2002, the pilots didn’t have international experience either. “Now, we’ve all taken courses at FlightSafety International, and all our pilots are inter-national qualified,” said Stoulil.

International trips are planned two to three months in advance, with the pilots working with a third-party trip planner.

For trips to Asia, the Hormel pilots fly from Minnesota to Anchorage, AK, where they do a tech stop and a crew rest stop before crossing the Pacific to Petropavlovsk, Russia. From there, they can fly to most destinations in East Asia.

The town of Austin, MN, is so small, passengers can leave their offices, and 15 minutes later be up in the air, on their way to plants anywhere in the world.
“That’s why we make the investment in having an aviation department,” declared Coffey. At a time when many operators are struggling to attract and retain talent, Hormel has been able to staff key positions and keep high-performing team members onboard for many years. The average tenure among flight department personnel is well over 10 years.

“There’s a lot of turnover in the industry right now, but we put a lot of emphasis on growing talent within the company,” said Chief Pilot Rick Stoulil. “We try to find people who fit our system and our culture. They must have the [requisite aviation] experience, but more importantly, they must connect with the passengers, and they have to keep safety first.”

When filling a recent job opening, Hormel recruited nationwide. The company was able to find a pilot who was ready to leave airline life and stop commuting. Company officials say they are able to retain talent because of the company’s strong culture and focus on professional development.

“Hormel’s philosophy is to promote from within,” said Chief of Aircraft Maintenance Dave Triebwasser, who is slated to retire in about three years. “We have clear plans for Michael [Haag, his fellow technician] to take over this role. It gives him ownership and shows him there’s a future to stick around for.”

Personnel:
Six pilots, two maintenance technicians and one scheduler who is also assistant to the accountable executive.

This article originally appeared in the Jan/Feb 2019 issue of Business Aviation Insider.