Flying High and Not Leveling Off: Nationwide Insurance

Aviation is not an industry for staying put. It’s literally about reaching new heights. The aviation operation at Nationwide Insurance in Columbus, OH has made a department-wide habit of finding new ways to improve.

In 2010, the department earned an NBAA Safe Flying Achievement Award for 50 years of accident-free flying, and the flight operation continues to find ways to enhance safety and customer service, which has earned it praise from passengers.

We perform every day as if we’re being tested on our professionalism and customer service. We have to continue looking for ways to wow our customers.

“It’s exceptional customer service, and we’re truly co-workers with the flight team,” said Jeff Rommel, president of independent distribution for casualty and property insurance, who flies on the aircraft about twice a month. “They’re a world-class group of people, and very quick to make themselves available.”

The pilots, schedulers and maintenance technicians at Nationwide share a sense of pride in exceeding the expectations of the passengers who fly on the company’s three Bombardier Challenger 605s.

“We don’t distinguish between our passengers; we value all of our customers,” said Diane Bassetti, the flight coordinator and office manager. “We strive to be the best, and there’s always room to improve.”

If a passenger asks for something once – such as a granola bar on a short flight or a garment mending kit – it’ll be on the plane the next time – and every time – they fly. If the passengers are running late from an all-day event, the pilots will have catering waiting for them without being asked. “Then my team can eat and debrief on the flight back,” said Rommel. “It’s a flying meeting. We’re leveraging every minute we’ve got together.”

Delivering that level of service depends on a great deal of behind-the-scenes coordination, made easier by Nationwide’s collegial aviation department culture, where everyone backs each other up. When a flight’s late returning to base, the pilots tell maintenance technicians not to wait; they can tow the airplane into the hangar themselves.

“We perform every day as if we’re being tested on our professionalism and customer service,” said Dan Wolfe, associate vice president and general manager of aviation. “We have to continue looking for ways to wow our customers.”

One of the best things that happened to our aviation department was IS-BAO and bringing a safety management system into our culture.

To really go beyond passengers’ expectations, Wolfe reimagined what their experience could be from the moment they arrive at the airfield, and he changed the name of his department to the Nationwide Aviation Business Center. More than just a hangar, the Nationwide facility on Port Columbus International Airport (CMH) has a large conference room, private alcoves for making phone calls and a lobby for passengers to gather before a flight while a safety video plays.

“Our passengers often times need to meet in our conference room right before or after a flight to actively build the business,” said Wolfe. It’s also where Wolfe’s staff conducts safety training and department meetings.

Hazard Mitigations You Can See

It takes the same attention to detail and collaboration that Nationwide’s aviation personnel invest in customer service to achieve continuous improvement in safety. The flight operation has twice earned Stage 3 certification for the International Standard for Business Aircraft Operations (IS-BAO).

“One of the best things that happened to our aviation department was IS-BAO and bringing a safety management system into our culture,” said Chief Pilot Mark Hente. “We have great discussions at our safety meetings. If something comes up, we just talk it through and come up with a solution. You can walk around this building and see and touch the hazard mitigations we’ve come up with.”

At one meeting, the safety committee discussed a “hit report” submitted by a pilot after a winter flight to Des Moines, IA. As the flight manual calls for in cold weather, the crew spun the engine fans during pre-departure inspection. They went outside to check the fan, but in the freezing rain, there was ice on the wing and it was unsafe to climb up on a ladder. To complete the inspection, the crew delayed the flight and returned to the hangar.

After that safety meeting, Maintenance Technician Erick Hildebrandt designed a handheld, telescoping pole with a mirror mounted on the end. It’s now standard equipment for checking the fans and intakes on all Nationwide flights.

“It’s probably a $40 tool,” said Wolfe. “Safety culture is not all about resources, it’s about your attitude and the ability to perform. With IS-BAO, we’re all part of a process to improve, and that’s our whole foundation.”

It Starts With Personal Improvement

Wolfe understands that an aviation team that continuously improves depends on each person in that department to strive to be better, and he strongly encourages his team to pursue career development. Wolfe and two other pilots have MBAs, and three more are working toward their MBA. Chief of Maintenance Gib Harris and Senior Technician Joe Lippert are both Certified Aviation Managers (CAMs). Harris also is a member of the Bombardier Challenger 600 advisory committee, as is Senior Captain Scott Peters.

In fact, nearly every member of the Nationwide team is involved in an industry group of some kind, including the Central Ohio Chapter of the Professional Aviation Maintenance Association, or the Ohio Regional Business Aviation Association, where Captain Jeff Poeppelman currently serves as president. And Nationwide staff members attend almost every NBAA conference on the calendar, often presenting in education sessions.

“We want our people out there, talking to other operators and bringing back new ideas,” said Hente. “We’re looking to advance our people and make the whole industry better.”

Nationwide also gives back to the industry through its maintenance internship program for students at Columbus State University. Nationwide has run the program every year since 2007 and hosts as many as two interns at a time.

“It’s one of the things we’re most proud of,” said Lippert. “It’s maintenance fundamentals. It doesn’t matter if it’s maintenance or flying, the foundation is about following a checklist every time; it’s about the details.”

Learn more about this NBAA member at www.nationwide.com. 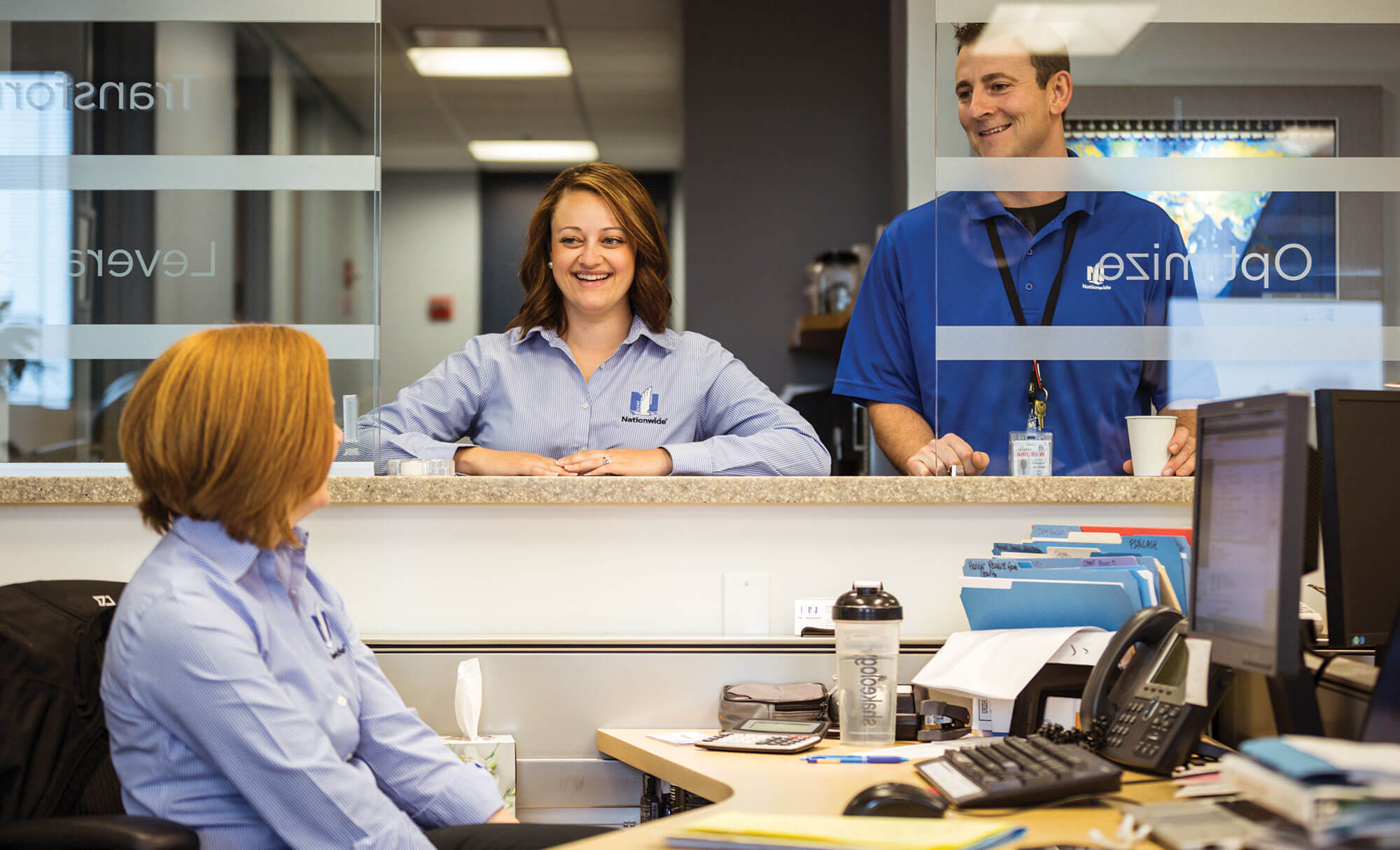 Nationwide acquired Allied Insurance in 1998, and the merger of the two companies created a need for numerous employees to travel between Columbus, OH, and Allied’s offices in Des Moines, IA. What would be a 10-hour drive across four states is less than an 80-minute trip by air, but there are no direct airline flights.

“Des Moines is not hard to get to,” said Associate Vice President and General Manager of Aviation Dan Wolfe, “but you have to go through Minneapolis or Chicago and spend an overnight.” The situation “demanded a solution to transport people as efficiently as possible.”

Starting in 2005, Nationwide contracted with a regional carrier to provide direct scheduled service four times a week, initially using a 37-seat aircraft and later a 50-seater.

Travel requirements declined after the 2008 economic downturn, so Nationwide flew the route with its own aircraft on an on-demand basis. When travel to Des Moines increased, the company based a jet there for a couple of years to reduce the number of deadheads from Columbus.

Today, the solution is a “flex shuttle,” dispatching one of their 10-seat Challenger 605s to Des Moines and making it available to everyone in the company, based on aircraft availability.

Personnel:
10 pilots (including a department manager who flies), four maintenance technicians, one scheduler, one flight coordinator/office manager and one administrative assistant.

This article originally appeared in the July/Aug 2015 issue of Business Aviation Insider.