How this stadium builder uses business aviation to compete nationwide.

From high school football stadiums to little league ballparks, sports fans around the country enjoy the products supplied by the family-operated Southern Bleacher Company, which uses business aviation to remain flexible and responsive to customers.

Established in 1946, Southern Bleacher now employs 160 people in the North Texas community of Graham, population 8,900. Although based in a small town, the company’s products are installed in high-profile locations such as Tennessee’s Bristol Motor Speedway and university stadiums from Louisiana State University to California’s Stanford University, as well as at thousands of local high schools, smaller colleges and fairgrounds throughout the United States and Canada. The company completes an average of 300 jobs annually.

“High school football stadiums are our bread and butter,” noted Wyatt Pettus, vice president and grandson of a company co-founder. “It’s nice to have big projects at grandstands and racetracks, but our core business is meeting the needs of high school football and baseball fields.”

In order to better serve its many customers in smaller communities, which often are far from airline hubs, Southern Bleacher began utilizing business aircraft in 1998 to quickly respond to on-site construction and engineering needs and attract new business.

The company’s current fleet includes an Embraer Phenom 100 light jet and a piston-powered Piper Malibu Mirage that has the same six-seat capacity and Garmin G1000 avionics as the jet. Both aircraft are hangared at Graham Municipal Airport (RPH), and in 2013, they flew a combined 485 hours, completing 114 flights to 130 destinations across the country.

Chief Pilot Jim McIrvin, who joined the company in 2008, flies both company aircraft single-pilot. “The Piper is most effective for trips 250 nm or less, payload permitting,” McIrvin noted. “Beyond that, we’ll usually run the jet, largely in the interest of time.”

Saving time is the greatest benefit Southern Bleacher derives from using its airplanes. McIrvin recalled speaking several years ago with a sales representative who was convinced that hopping an airline flight was the most efficient travel option for his trip to visit a client in New Jersey.

“We compared the numbers,” explained McIrvin. “As it turned out, we would’ve been within 45 minutes of landing at Teterboro [in our company airplane] by the time his airline flight was pushing back from the gate at DFW.”

Pettus noted that business aviation maximizes employee productivity. “Whenever you’re paying someone for time that they’re not working, you’re losing money,” he said. “It takes three hours from the time someone leaves town [Graham] to drive to DFW and finally get seated on an airliner.

“That is three hours of non-productive time,” he continued, “while in our aircraft, an associate could be refining their sales presentation, or a construction crew could be reviewing a plan to troubleshoot a situation at a job site.” 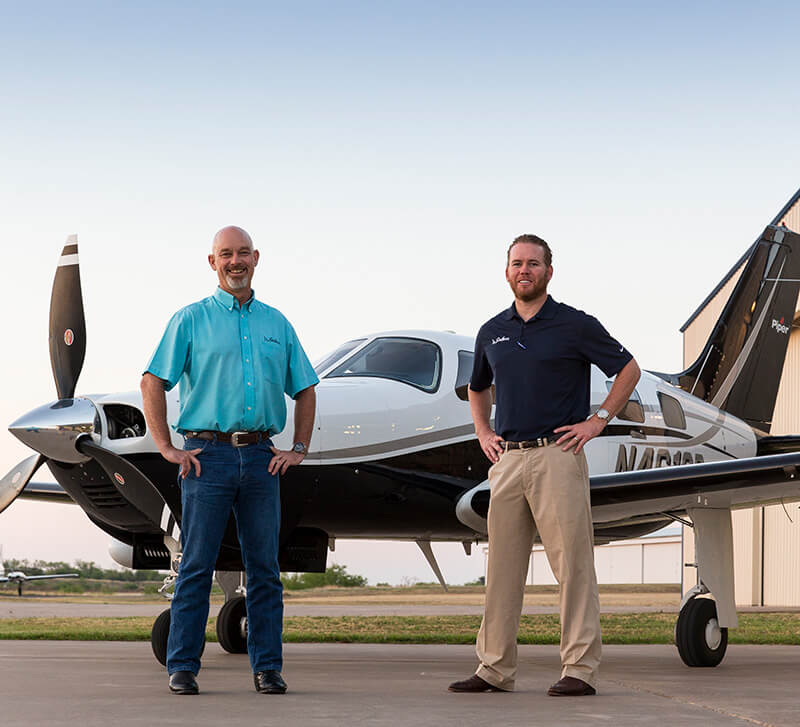 The Safety Focus of a One-Man Operation

As the head of Southern Bleacher’s flight department, the title “chief pilot” does not adequately convey the breadth of McIrvin’s duties. When not flying, he is responsible for dispatching the fleet, coordinating maintenance and repairs, and keeping careful account of flying time.

“This would not be a good job for a pilot who only wants to pick up his schedule from dispatch and go flying,” McIrvin said with a laugh. “There’s a variety of jobs out there for that kind of pilot, but I’m not cut from that cloth. It takes more of an investment on my part to manage it all, but that’s how I’m built, and I really enjoy it.”

That coordination includes scheduling McIrvin’s vacations around maintenance and other downtime for the aircraft. “The same goes for my recurrent training, which I schedule around the major annual inspection required on the Phenom,” he added. “Those two requirements align well.”

Southern Bleacher’s emphasis on safety is evident from McIrvin and Pettus’ involvement with the Partnership for Corporate Aviation Training based in San Antonio, TX. McIrvin even presents at the organization’s events. He also is an instrument flight instructor and teaches upset recovery.

Southern Bleacher became an NBAA Member in 2008 and in 2013 earned its first NBAA Flying Safety Award, in recognition of five years of accident-free operations. McIrvin acknowledges that programs offered by NBAA and others benefit smaller operations like his.

“There are many robust flight departments out there, but truthfully, the majority of small business operations are ‘one airplane, one pilot,’” said McIrvin. “It’s important for these smaller departments to utilize the variety of resources that are out there to assist them.” Giving Back to the Community

Wherever you go in Graham, everyone recognizes the name Southern Bleacher. Almost all residents know someone who works or has worked there, and the company’s importance to the community is apparent.

That relationship goes beyond the company’s role as the largest non-municipal employer in town. Southern Bleacher also offers scholarships to college-bound students and donates materials, design services and labor for the grandstands and seating at the town’s ball fields.

“We help where we can,” said Pettus. “We also get asked by local organizations to convert scrap steel in our yard into picnic tables, bleachers – whatever they may need. And we do it.”

Southern Bleacher and Graham’s futures are inextricably intertwined. “We’ve seen this community grow as our company has grown,” said Pettus. “We’re in Graham for the long haul.”

Maintenance:
The Phenom is maintained by Embraer factory-authorized service centers, and the Malibu is serviced by facilities in Texas and Kansas.