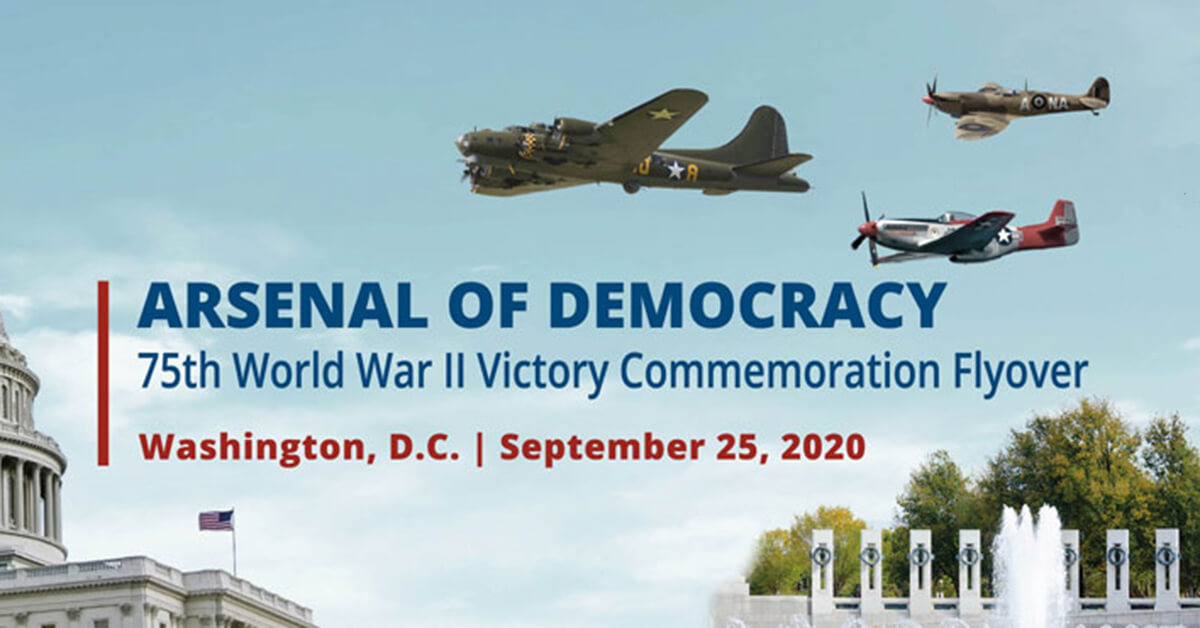 An aerial tribute commemorating the 75th anniversary of the end of World War II will take place Friday, Sept. 25 over the National Mall and Potomac River. Organized by the Arsenal of Democracy Flyover, the aerial tribute will include more than 65 WWII era airplanes flying in historical sequence.

The flyover, which was originally scheduled to coincide with the 75th anniversary of VE-Day on May 8, was rescheduled due to the pandemic.

The aerial tribute will be live streamed on the Arsenal of Democracy Flyover website and Facebook page, and will include special programming, including interviews with veterans and heroes, starting at 10 a.m. (EDT). Live coverage of the first formation approaching the National Mall with detailed narration will start at approximately 11:30 a.m. It is estimated that the aerial tribute over the National Mall will last approximately one hour.

To complement the aerial tribute, the Smithsonian Institution’s Air & Space Magazine has put together a special webpage dedicated to the 75th anniversary of the end of WWII. The webpage includes the history and stories of WWII aircraft, many of which are participating in the aerial tribute.

“We are proud and humbled by the large number of pilots and aircraft owners who have dedicated their time and aircraft to pay homage to our World War II veterans,” said Mike Ginter, airboss for the Arsenal of Democracy Flyover and Executive Committee member. “It truly is fulfilling to see the reactions and emotions that overcome our nations’ heroes when they see the aircraft they flew or worked on over 75 years ago fly overhead.”

“The flyover is the most fitting tribute to honor not just the heroes who served honorably in World War II, but all of the men and women in uniform who have dedicated their lives to protecting our nation,” said NBAA President and CEO Ed Bolen.

The Arsenal of Democracy Flyover was organized to be as part of the commemorative programming events authorized in the 75th Anniversary of World War II Commemoration Act, which was signed into law in January 2019.

Prior to the official opening of NBAA’s 2023 Schedulers & Dispatchers Conference – as part of the week-long conference’s Day of Service – about 30 attendees took time to learn more about Thistle Farms, meet some of the women it has helped and volunteer their time to make products to be sold in the group’s store.
Read More