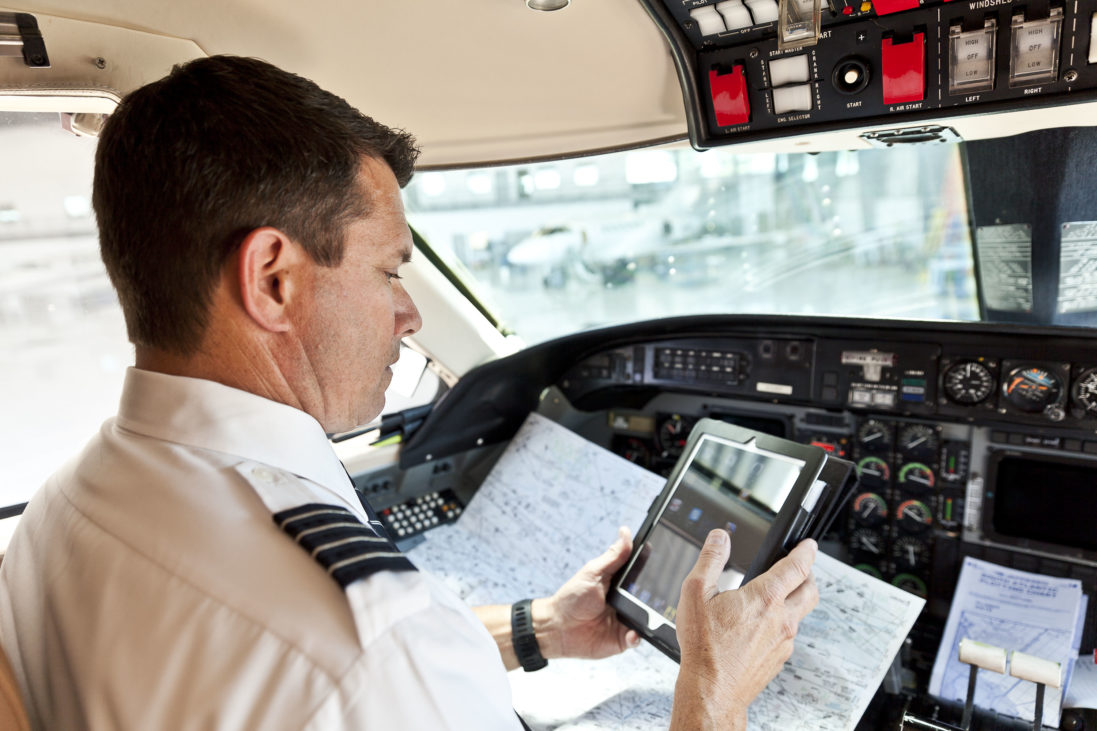 An Electronic Flight Bag (EFB) is a device that hosts applications that allow flight crews to perform a variety of functions that were traditionally accomplished by using paper products and tools. In its simplest form, an EFB can perform basic flight planning calculations and display a variety of digital documentation, including navigational charts, operations manuals, and aircraft checklists. The most advanced EFBs are fully certified as part of the aircraft avionics system and are integrated with aircraft systems such as the FMS. These advanced systems are also able to display an aircraft’s position on navigational charts, depict real-time weather, and perform many complex flight-planning tasks.

With many pilots using iPads to display approach plates, airport diagrams and other digital documentation, the FAA released InFO 11011 to clarify when authorization is needed to use the device. For Part 91 operators, authorization is not required to utilize an iPad in this capacity. If an operator plans to install a mounting device or power source, requirements found in Advisory Circular 120-76D are still applicable.

The information in AC 120-76D is directed toward certificated air carriers and fractional providers, but Part 91 operators should as a best practice refer to the guidance on developing EFB training programs and making the transition to a paperless cockpit. The pilot in command is ultimately responsible for ensuring that the proper aeronautical charts are available for the flight, so it is important to document and validate the reliability of the iPad during the transition. During this initial transition period the crew should carry paper backup materials.

Part 91F operators are required to comply with AC 91-78 Use of Class 1 or Class 2 Electronic Flight Bag (EFB), but do not need written approval. They should also validate compliance with FAR 91.503 (flying equipment and operating information for large/turbine powered aircraft) and FAR 91.21 (portable electronic devices) when using an iPad. Part 91F operators must also have a secondary system in place to augment their primary iPad. The secondary system can simply be a backup iPad or alternate EFB.

Before using an EFB when operating under Part 91K, 125, or 135, authorization must be received from the principal inspector. The procedures for obtaining this approval are contained in FAA Order 8900.1 and AC 120-76D. OpSpec/MSpec/TSpec/LOA paragraph A025 authorizes the use of Electronic Signatures, Recordkeeping Systems, and Manuals and will be required for operators wishing to use an EFB for any of these functions.

During the approval process, the operator will need to develop training programs and operational procedures to utilize the EFB in compliance with FAA guidance.

The following classifications, described by the FAA, help operators determine what type of approval is necessary to use an EFB.

Type A Software Applications
The least complex software providing electronic documentation such as flight manuals but no navigational charts.

Type B Software Applications
Provides all Type A information and also can display approach charts, calculate weight and balance, and deliver weather information.

Type C Software
Provides all Type A and B information and can display “own-ship” position on approach and airport charts.

EFB Part 91 Best Practices Aug. 11, 2021
While electronic flight bags can be helpful tools, it’s important to use these devices and their associated software in a safe manner.
Managing Mobile Technology Requires Foresight, Planning Dec. 23, 2015
Mobile technology saves money and time, but transitioning to a paperless flight operation requires planning, according to experts who took part in a Dec. 16, 2015, NBAA webinar.
App Developer Who Urges ‘Sterile iPad’ Approach to Present at Chicago Forum Aug. 19, 2013
Robert Creek will present a seminar titled 'A Pilot's Guide to Using iPads in the Cockpit' at NBAA's Business Aviation Regional Forum at Illinois's Chicago/Waukegan Airport on Sept. 12, 2013.
Apple Issues New Compliance Data for iPad EFB Sept. 5, 2012
If you use an iPad as the platform for your EFB, Apple did you a favor. In a recent posting to its iPad support knowledge base, Apple listed its international battery safety certifications, meeting requirements of FAA Advisory Circular 120-76B.
NBAA Helps Members Understand FAA’s New EFB Guidance Aug. 27, 2012
The FAA recently issued an update to the EFB Advisory Circular, which includes guidance on electronic flight bag systems aimed specifically at certificated operators and operators of large and turbine-powered multi-engine aircraft.
NBAA Highlights Changes in FAA’s Revised Guidance on EFB Use July 24, 2012
NBAA's Operations Service Group examined changes that the Federal Aviation Administration made to its guidance on the use of electronic flight bags (EFBs) in flight operations, and clarified the new provisions.
Webinar Discusses International Flight With Digital Charts July 23, 2012
A record number of participants - more than 300 Members - took part in a free NBAA webinar July 18, 2012, sponsored by Jeppesen, which discussed international flights using digital charts.
FAA Publishes Revised EFB Advisory Circular June 11, 2012
An iPad update included with iOS 5 is deleting pilot charts on the popular tablet, but Apple says a fix is coming.
Senate Committee Questions FAA’s Plan for E-Chart Fees May 11, 2012
New charges for electronic chart data, originally expected to take effect April 5, 2012, are now likely on hold until the FAA seeks formal public comments and justifies its pricing to lawmakers.
NBAA Represents Business Aviation in FAA’s Digital Chart Distribution Planning Dec. 16, 2011
The FAA AeroNav division will soon be implementing user fees for that access as digital demand has led to budget shortfalls.
FAA’s Plan to Charge for iPad Charts Raises Eyebrows and Ire Nov. 23, 2011
A plan announced by the Federal Aviation Administration to begin charging for e-tablet charts has raised users’ ire.