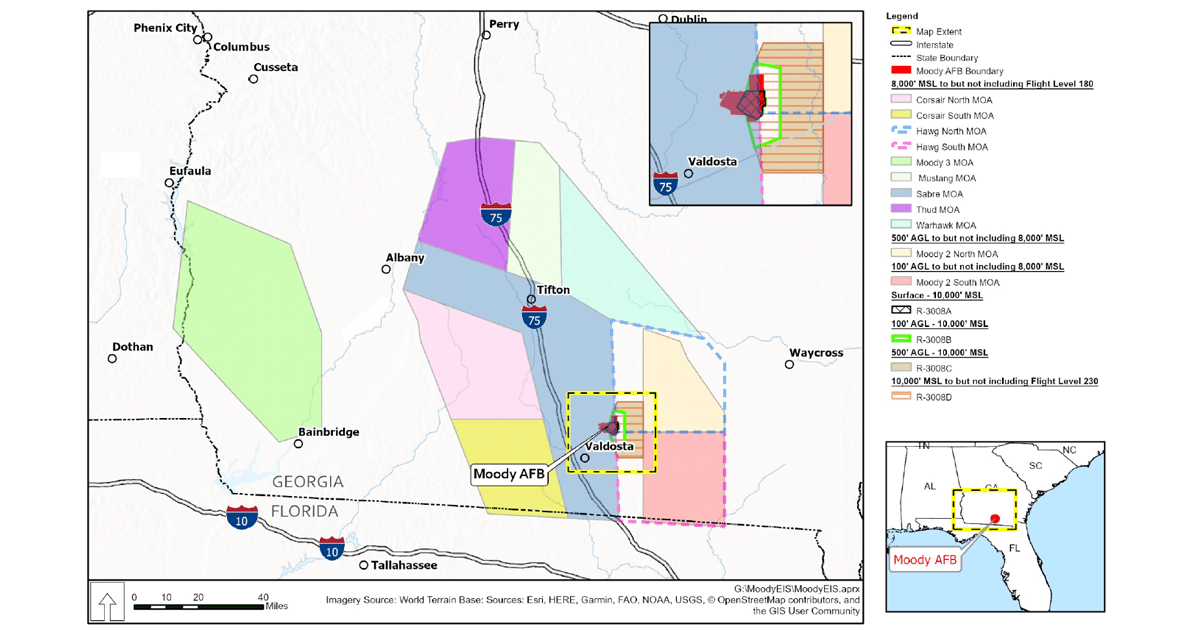 To better accommodate low-altitude training of close air support A-10s and HC-130 gunships and MH-60 combat search and rescue helicopters, the U.S. Air Force has published a draft environmental impact statement (D-EIS) for its comprehensive airspace initiative, which would lower most of the special-use airspace in the 85,000-square mile Moody Air Force Base complex that covers southern Georgia, northern Florida and southeastern Alabama.

In the proposal, the lowered floors of the existing military operation areas (MOAs) would lead to 33,000 airspace conflicts (20,000 IFR, 13,000 VFR) with civilian aircraft annually, said Heidi Williams, NBAA’s director of air traffic services and infrastructure. Alternative options would reduce that number to 32,700 or 29,000, 90 and 81 flights a day, respectively.

“If you are transiting this airspace or fly to and from the airports impacted, we encourage you to comment on the Air Force proposal and attend the virtual public meeting at 5:30 p.m. on Oct. 29,” she said. The comment period ends Nov 24. View the project’s website to comment on the proposal.

Surrounding ATC facilities would manage the airspace conflicts, and the FAA is working with the Air Force on this issue. Divided into 10 MOAs and restricted areas, the Moody SUA complex covers more than a dozen airports.

The Air Force proposes three alternatives that would lower four MOA floors to 1,000, 2,000 or 4,000-feet AGL. All alternatives would lower the floors of the remaining MOAs with some areas as low as 100 feet AGL. The air traffic controlled airspace above the MOAs raises the military training ceiling to, but not including Flight Level 230.

Lowering the floor of this airspace complex, coupled with the ATCA above extending into the flight levels, presents a challenge for business aircraft operations using this heavily transited area while nearly shutting off access to many important airports, said Williams.

If approved, the D-EIS said the number of training operations would not change, but the Air Force would redistribute them among the five low-altitude areas now in use and the new areas, and shift training schedules to more daytime hours.